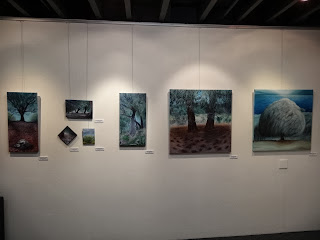 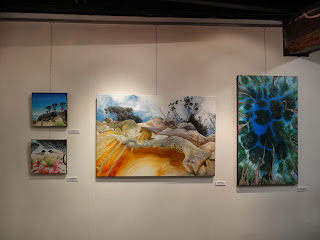 Before 1788, Aboriginal people seasonally lived within allocasuarina coastal stands in Tasmania. Their pine needles form a comfortable, dry and soft cushion around them. The Old People would have collected their pine cones, removed dead branches and needles that gather in the forks of the tree trunks and burnt this dead fuel.

Today, She Oak glades are abandoned and neglected, as is much of Tasmania’s nature that is preserved.  Maria Island alloacasuarinas miss the Old People. I have attempted to paint these trees as they might have appeared when the Tyreddeme clan returned in winter to live under the trees. One season of fallen pine cones would need collecting and a few dead limbs and needles would need removing from the lower living area, unlike the photograph of this neglected tree that was taken in the winter 2013.

I dream of a time in the future where our country is cared for and managed  in a way influenced by the way the Aboriginal people ran their estates.

I attempt to depict the spiritual energy that dwells around the coast. These stylised images are based upon photographs I have taken. I manipulate the composition in attempts to create a harmonious and energetic essence that is the potential of the place, as if it were cared for as a gardener would care for their estate, or a resident would maintain their house.

I feel optimistic that our society is moving away from the polarised needs to conserve or destruct fauna and flora. People are speaking about the importance of having dynamic relationships with natural areas. Locking up nature to let it grow feral is becoming an out dated conservative model.  People realise the importance of burning off to reduce fuel and prevent catastrophic fires. Mainstream society is becoming more eager to learn from Aboriginal practices of sustainability, including hunting to maintain animal populations at a manageable level, so they do not suffer through neglect and die on-mass during times of drought.

I dedicate this exhibition to my Aunty Alcionie (Onie) Shaw who passed away this year, daughter of Rita May Waldron (nee Riley), great, great, great  granddaughter of Dolly Dalrymple, daughter of Woretermoeteyenner, daughter of Mannalargenna, chief of the Ben Lomond nation (Plangermaireener Nation) (Loontiternairerlehoiner Nation.)
I hope you enjoy my eclectic island dreams.