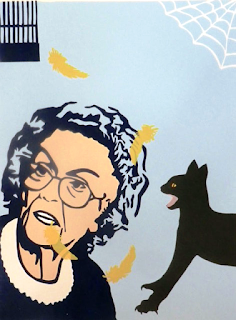 "There Was An Old Lady Who Swallowed a Fly.."
by Margaret McAteer
screenprint 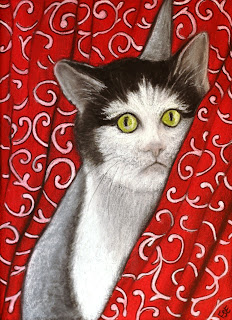 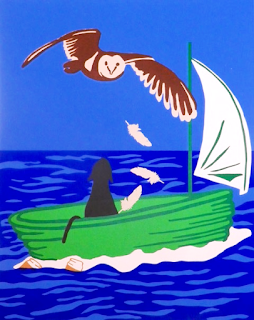 "The Owl and the Pussycat"
by Margaret McAteer
screenprint 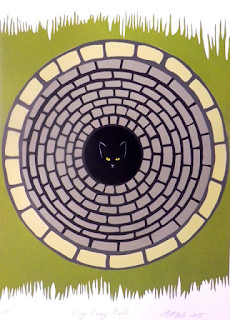 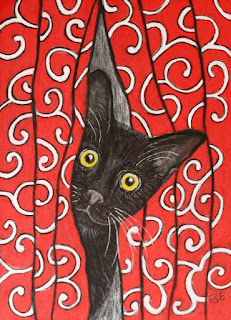 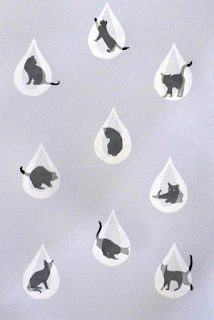 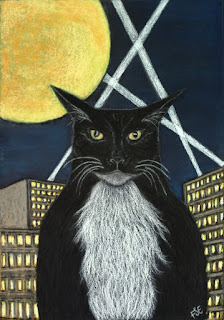 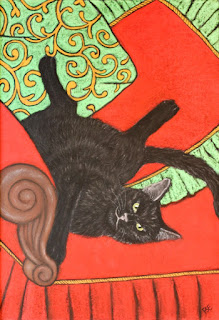 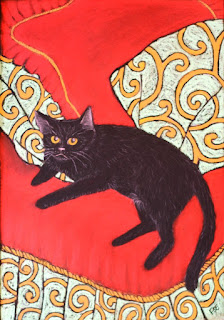 "Who are You Looking at?"
Felicity Edwards
pastel
390mmx270mm

When Felicity and Margaret, two feline fanciers, discovered that their joint exhibition was going to be on at the same time as the infamous DARK MOFO their cat theme had already been decided. Dark MeOwFO was the obvious choice for a title. Both artists like to put a bit of humour into their art works so, with tongues firmly planted in cheeks, they have produced some light hearted images that are a little on the dark side to hopefully put a smile on your face.
Felicity’s drawings are one off originals done with pastel on Mi Tientes acid free paper.
Felicity has a selection of quirky cat personalities in her images with most of her inspiration coming directly from her own cats or cats she has known.
The flier image began as a take on Batman with the evil look that her cat Marvin gives when planning to pounce. The idea then morphed into “Dark MeOwFO” with the addition of extra search lights. “Couch Potato” is her very rotund cat Xena in her favourite sleeping position. “Are you looking at me?” is Marvin again doing his look of contempt. “Harry Purrter” evolved because this character looked like he was wearing glasses and she couldn’t resist the pun. “BOO” is something that most cat owners can relate to as little feline faces tend to pop out from behind the curtains or other hiding places on a regular basis.
Margaret’s works are all limited edition hand cut screen prints. This is quite a rare method in this digital age as materials are hard to source and it also requires immense skill and patience.
Margaret has used old nursery rhymes and children’s poetry for her inspiration and injected her own twist on “Ding dong dell, Pussy’s in the well”, “The Owl and the Pussy Cat”, “There was an old lady who swallowed a fly” and also has included “It’s raining cats” (no dogs though).

Both artists are kept company by their cats in the studio. This can be a source of inspiration however more often than not their presence can be a hindrance.

Margaret finds it difficult enough to cut out her stencils without the help of her cat Peppy. 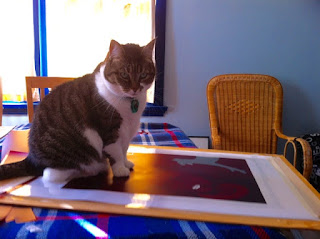 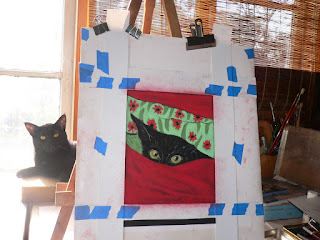